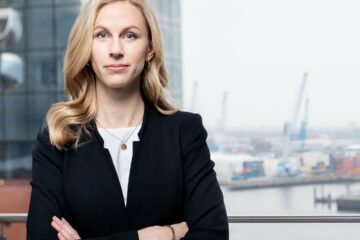 Cathérine Elkemann joined HARTE-BAVENDAMM Rechtsanwälte as a lawyer in 2016. She advises clients in all matters of intellectual property law, in particular in trade mark law, competition law and domain disputes, with a focus on strategic advice, litigation and dispute settlement.

In addition, she is highly experienced in the management of larger trade mark and design portfolios, in trade mark clearance and in negotiating and drafting contracts such as demarcation agreement. She represents clients in all relevant proceedings, particularly before the German Patent and Trademark Office and the European Union Intellectual Property Offices, the WIPO, the German Patent Court and the European Courts.

Also, she teaches a course in Intellectual Property Law at the Hamburg University of Technology (TUHH).

Cathérine studied law at the Westfälische Wilhelms-Universität Münster, where she also attended a specialised language course for English law. Subsequently, she obtained an LL.M. in Intellectual Property Law at Stellenbosch University in South Africa and completed her legal clerkship at the Hanseatic Higher District Court of Hamburg, including stations at the Hamburg Regional Court in the Chamber for trade mark, competition and patent law as well as in the intellectual property department of a major international law firm in Hamburg and London.

Cathérine Elkemann is a member of the German Association for Intellectual Property and Copyright (GRUR). She is fluent in German and English.